Cosmic Karma Fire's members are highly-trained, experienced and dedicated to the success of our troupe. Click on pictures for contact or submit one by clicking the logo above 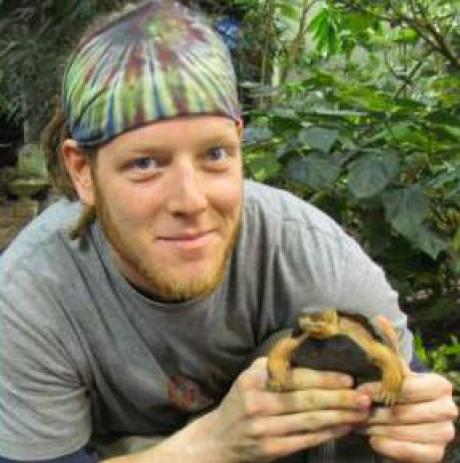 Greg, founder of Cosmic Karma Fire, has brought so much energy and professionalism to CKF. Cosmic Karma Fire has become a group we know as family and friends who, together, create an unforgettable show for all who love to watch us perform. Greg has been performing for 7 years. He loves to perform and travel as much as possible, and attends as many festivals as he can. Performing almost every tool there is, Greg's wide range of fire skills never fails to surprise an audience. Some of his favorites are; poi, staff, breathing, eating, fleshing, commets, snakes, jump rope, num chucks, hackie sack, double staff, meteor, rope dart, and more. But most of all, his favorite performing tool is a smile, because he loves what he does. He enjoys interacting with the crowd and getting them involved with the show. When not spinning fire, he is a professional body piercer, makes jewelry and wire wraps, clothes, and fire tools. He owns The Body Alternative located on Main Street in Oneonta, NY. He loves his son Malachite, his two dogs, Turbo and Rajah, and enjoys bringing them to shows on occasion. He enjoys meeting new people and making friends so don't be afraid to contact him or any of CKF. 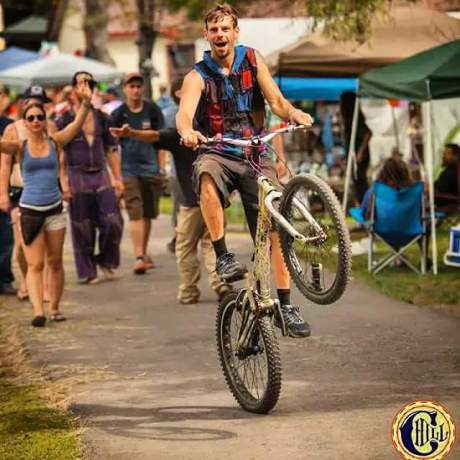 Joe Steinicki, from New Haven, CT, and makes his living as a designer and fine artist, as well as performing bike stunt and fire shows. He has been competing in a sport called bicycle trials for over 15 years, has numerous podium finishes, and has team sponsorships for clothing and bike parts. Wanting to get into performing with his bike, things began to fall into place as he met his current girlfriend LB of Cosmic Karma Fire and found out about fire performing. With her, and other fire performers, he developed a trials bike that has torches attached to the axles. The fire bike show is the first of it’s kind, combining his ability to spin and jump his bike with fire spinning in an exciting and nail-biting new way. Aside from the fire bike, he has been spinning the devil sticks, otherwise known as flower sticks or juggling sticks, since he was a child. He also spins poi, and is beginning to learn all the different performing props such as staff, sword, rope dart as well as fire eating. He brings originality, creativity, humor to his performance. 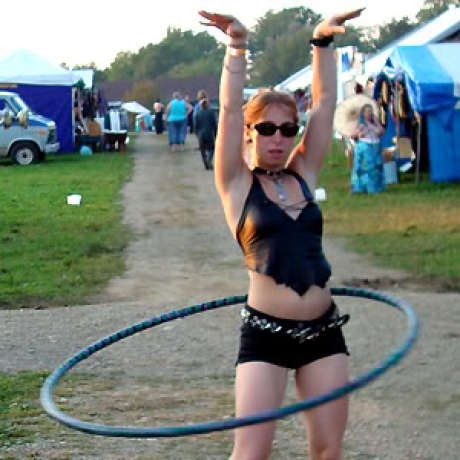 LB of LBSpinnerZ has been hula hooping since 1997 and spinning fire since 2005. Along with hooping, LB performs fire eating, breathing, devil stix, and paints her body with fire. She can also be found walking on stilts, inside of a giant puppet, and with roller skates strapped to her feet under the name of Pam TERROR! # 9. 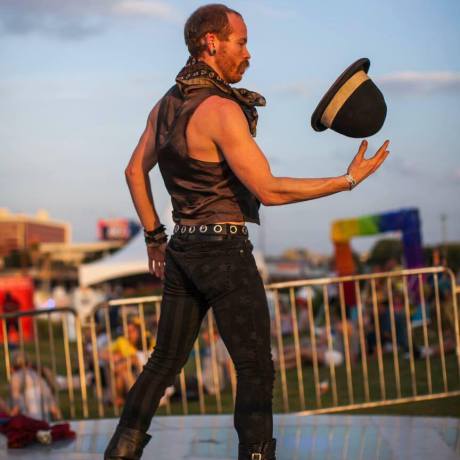 These are words that describe a fire performance by Chris Rovo. Drawing from over a decade of experience, Chris brings a level of expertise and skill to his shows that is unmatched by other fire performers. He embraces the element of danger, transforming the intensity of the fire into laughter and joy for all. If fire isn't quite right for your event Chris also offers LED/Glow performances, roving entertainment, group lessons, and can coordinate a feature show with multiple dancers. Whether it's a large public event or backyard party Chris can tailor his performance to fit your unique taste and needs.

Chris uses a wide variety of fire props, some of his own design, to wow audiences with a thrilling customized fire show. His comedic stylings and mind boggling stunts entertain audiences of all ages. This type of performance is best suited for outdoor events and select indoor venues. 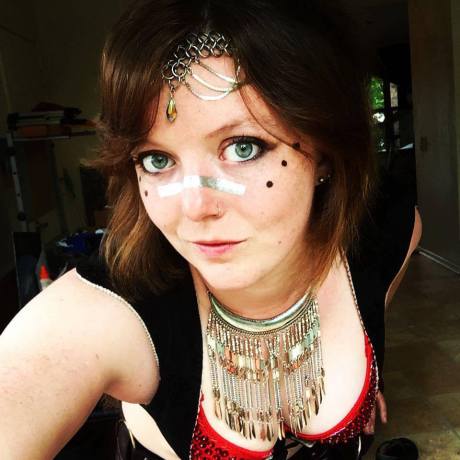 Kira Ann Bolin is no stranger to the stage. From a young age, she has been proficient in several forms of self expression. Her lifetime resume includes: a history of gymnastics, high diving, ballet, drill team and choir. Performance has played an integral part in the development of the woman she has become. Along with captivating audiences throughout her youth, she also spent 7 years in college majoring in American Sign Language; an admirable skill that allows her to communicate at an even deeper level with the world.

Her journeys beyond the classroom include notable accomplishments such as being a co-founder of the Austin Flow Jam; a circus skill-share meet up that happens every Tuesday at the State Capitol in Austin, Texas. Her talents have expanded to include aerial silks, hammock, pole and acrobatic yoga. Along with admirable

aerial experience, she also has an extensive library of fire and LED tools under her belt which are as follows: hula hoop, fans, poi, orb, wand, umbrella, fingers, Isis Wings and double staves.

Kira is dedicated to consistently refining and honing her abilities; driven beyond measure to exude grace and strength. Her travels have taken her all the way to Costa Rica, and landed her spots alongside renowned flow artists Nick Woolsey, Zan Moore and Banyan Gallagher. Kira has not only been an apprentice to some of the best, but is also an amazing teacher herself; sharing the joy of acro-yoga with students from all walks of life. As a creator, costume-designer and community-builder Kira Ann Bolin can hold her own. Any audience can clearly see the magic and radiance she brings forth from her spirit when she takes the stage. 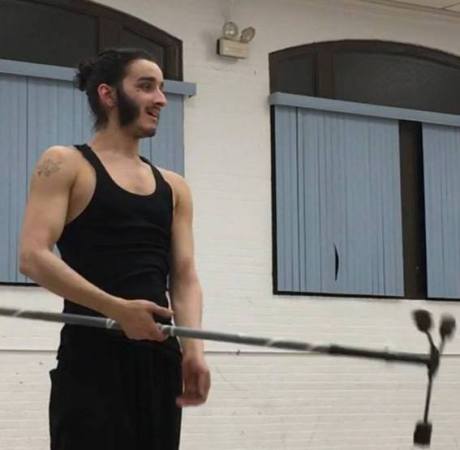 Steven Goodwin started his flow journey in 2012 at his local dance night scene being one of the few people spinning led poi in his home town of New Haven, CT. Since he found his flow and sense of belonging started venturing into the flow arts picking up anything anyone was willing to let him. Over the past 2 years he has been traveling with Cosmic Karma Fire performing and teaching 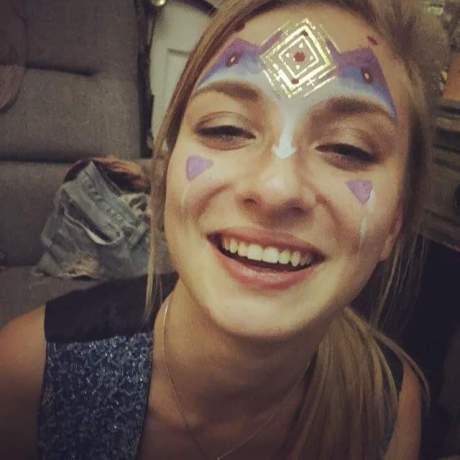 Hailing All the way from Boston MA, not only is this girl driven but always brings a fresh presence to each performance! Specializing in partner dragon and multi dragon showcases. She has been performing for over three years with dedication and a consistent pursuit to push the envelope. Her love of the fire life has only just begun. This girl is taking it to the next level. 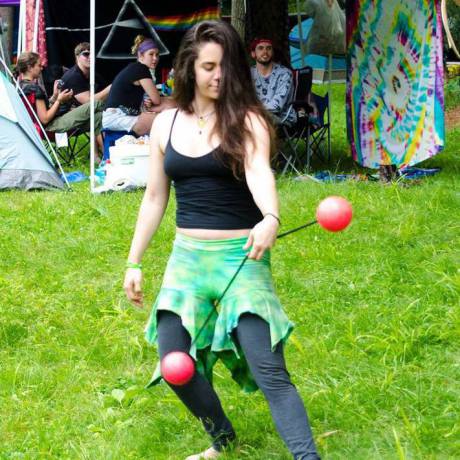 Currently resides in Philadelphia, Pa, had studied classical dance and ballet for 8 years. after the age of 12 she wanted to take a break from dance, and ended up never picking it back up again. Years later in 2013, she began her love for the flow arts through poi, and was able to incorporate her background and interests in dance more passionately into a modern and interpretive style. Sophia quickly became infatuated with all things flow arts, and has since then picked up a variety of different props including dragon staff, fans, hoops, double staves, and of course poi. 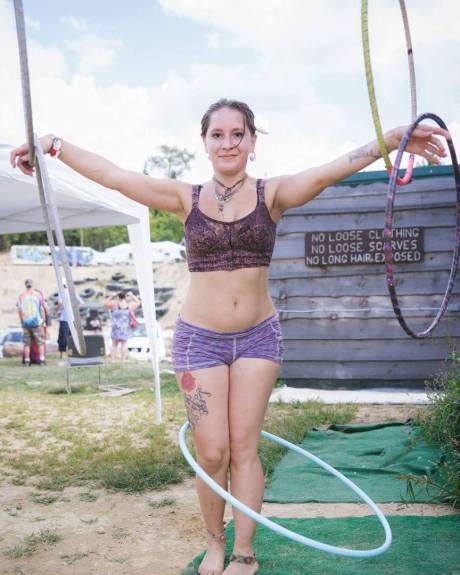 Bekah Meyers from Storrs, CT has been in her flow journey since 2014 started with hula hooping! As a singer she has learned to captivate the audience with her outrageous stage presence and contagious smile. She teaches hula hooping and poi to all ages and loves to show people their true potential.